HST and Small Business: Onus is a Dirty Word

The point: Trusting the government to tell you what you need to give them and when is like asking your three-year-old to make supper: remarkably inefficient. This post ends with an appeal to write your MP begging for a change in the way small businesses are notified of their HST responsibilities, so be warned: it’s impassioned.

Here’s a good way to waste an afternoon: go to the Canada Revenue Agency website and try to find out if your small business has to collect HST and when you have to remit it.

This isn’t a Taxes Are Hard, So Hire An Accountant post. By all means, hire an accountant who has passed the CPA exam requirements if you don’t have the time or the interest to figure out your own taxes. I like accountants. They’re good people, and precise doesn’t even cut it as an adjective.

No, this is a Read The Manual If You’re Going To Do Your Own Taxes post. A cautionary tale, if you like, and a reminder that the government doesn’t care about your time and money, except for the money that’s owed to them.

Imagine a plumbing business owned by a fairly precise and all around upstanding guy named Bill. Bill started Bill’s Plumbing in Ontario three years ago, and – because he’s precise and upstanding – Bill read through the Canada Revenue Agency’s General Information for GST/HST Registrants and knows that as soon as his business makes $30,000 in four consecutive quarters, he’ll have to start collecting HST.

Bill faithfully checked his income every quarter, and finally the big day came. He registered for an HST account, put this HST number on his invoices, and started collecting. He opened a separate business account and transferred every penny of tax he collected to it.

He knows he’s never going to make $1,500,000 a year, so he’ll always be an annual filer (that’s here in the guide). So he filed his first HST return and paid $4,133 on April 30th. He got a Notice of Assessment back, and a remittance voucher for the next year’s taxes marked due the following April.

The next year he repeats the cycle, except this time Bill gets a notice that he owes $135 in interest and penalties because he was supposed to be paying quarterly installments throughout the past year.

This is the first time Bill’s heard of it. He heads back to the HST Guide to look up installments again. Sure enough, it reads: “if you are an annual filer and your net tax for a fiscal year is $3,000 or more, you may have to make quarterly installment payments throughout the following fiscal year.”

Bill remembers reading that (here) when he was setting up his HST, but – because of the word “may”, Bill thought that installment payments were something the CRA told you about.

As in, “Thanks for being such a fine, upstanding citizen and filing your first HST return, Bill. Because you collected $4,133 last fiscal year on our behalf, this year we want you to send it to us in equal installments every three months.”

Let me repeat the phrase that Bill is now so familiar with he had his wife embroider it on a sampler to hang over his desk: “the onus is on the taxpayer to figure out when his remitting requirements change.”

That means that – although someone in a tax office somewhere (probably PEI, those bastards) received Bill’s return in April of last year, and flipped some switch deep in the bowels of the tax system so that another someone at another desk would expect Bill to predict the amount of HST he’d collect for an entire year, divide it by four, and remit it every three months, nobody told Bill that.

The moral of the story? Hire an accountant.

No, better yet, write to your MP. Tell him what a cock-eyed, Byzantine way that is to collect sales tax. Write him an impassioned letter begging him to re-think the government’s insistence on wasting valuable entrepreneurial time. Entreat him to make this statement from the Economic Action Plan (2013) actually true, instead of a pretty little throwaway sentence: “The CRA is helping small business owners avoid costly and time consuming audits by raising awareness of their tax obligations in order to help them to get it right from the start.”

You can find him here. Mine is Tony Clement. Who’s yours? 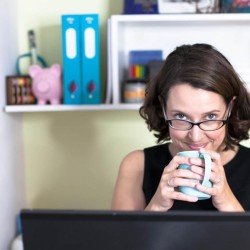 Sandi Martin is an ex-banker and fee only financial planner who specializes in working with regular folks who suspect their money might be a bit of a mess. She lives in beautiful Muskoka with her husband and three children, and works online and by phone with clients across Canada.

Spring (In Your Inbox)

Sorry, Who is it That's Suffering?

The Secret to a Successful Financial Plan

All posts by date
Tweets by @SandiMartinSPF